My Gran was a character... of course, everyone says that about 'their old gran'. No difference here; she was certainly a product of a poor but proud working class life.

What makes 'Granny Hickey' a.k.a. Sophia Lavinia Turland unique to me is that she is the only relative I have (had?) who was born in the 19th Century that I actually remember chunks of detail about, even though I was just 5 years old when she died. She was, from what I remember, a short (4'10") but well proportioned (read well-rounded) lady who had an aversion to all things 20th Century i.e. the T.V., Washing Machines and in fact, all things electrical.

She always wore a 'pinner' (a cross-over pinafore) in a busy floral pattern, and black lace-up shoes with what I remember as a Cuban heel, and her hair was always in a bun at the nape of her neck... The door and front woodwork of number 52 Frances Road was always, always painted in Cherry Red and Cream.

As a child, many members of my family still lived on the same street as Gran. I remember on many occasions waiting outside the pristine front of number 52 with Gran... we would be waiting for the 'pigman' who came once a week. Gran would say 'look-out for the Pigman', but I never saw him. I had already conjured up visions of a man with a pig-like head so when his cart was heard trundling down the road, I was off. Today, my Gran would be a champion of Environmental recycling, but in the 60s common sense dictated that any scraps or waste were set aside in a large round sieve-like tray for collection by the Pigman for, I suppose - his pigs.

Thursday has always been my favourite day; this I believe stems back to early childhood. My parents made Thursday their 'night out' and my Nan Rose would babysit. From the age of 3, this meant being taken by my Nan up the road to Granny Hickey's for some thick, home-made rice-pudding and being allowed to stay up late to watch 'Mrs Thursday' on the T.V. My Nan and my Gran naturally indulged me. Saturday's were much the same; dinner-time was spent with her continuously frying steak for the family to have with HP sauce whilst everyone picked their horses. Later on, we'd settle down to a tea of tinned salmon (red), Hovis and salad. And even as a 4 year old, I'd flit from living room to front (best) room to watch the Jimmy Clitheroe Show followed by Dixon of Dock Green. Oh happy days.

My Gran bless her could not read nor write. She only went to school (so 'twas said) for half a day, but she was a bright as a button and used to take bets for a local man. This of course happened before street betting was made legal in the early 60s. Everyone in my family - and anyone else in the neighbourhood who liked a flutter would use a pseudonym and place bets with her. My Nan (who was religious to the end) used S.A.G - St Anthony's Guide for the patron saint of lost 'things'!.., my Mom whose name is Eileen was known as 'Eileen Allanah'... it didn't take a genius to work it out.  If, as happened on occasions, the local Bobby paid a visit (plain clothed of course), the book would disappear upstairs with one of her sons and out of the boxroom window... If they weren't quite quick enough to 'lose' it, my Gran would end up making a court appearance - all expenses paid of course.

I do believe that my Gran was quite embarassed about her illiteracy. I know that during a spell in hospital in the 60s, she was asked to sign papers and she made the excuse that she couldn't find her glasses... The story goes that she was not able to attend school regularly because from the age of 7, she took in washing to keep her family above subsistence level. This is somewhat corroborated by the fact that her father - John Buckler Turland was a Laundryman by trade - but family lore has it that he was a drunk who could not hold down work.

My Gran was, like thousands of women of her generation, a very hard-working, matriarchal figure who had to organise her family - lest it fall apart. She had it tough - but only as tough as the next person. Within the duration of the Great War, my Gran had lost 2 children at birth, 1 son of Scarletina, a son and a brother in the battlefields of the Somme and her father due to illness at the close of the war. By the time WW2 had climaxed, she had lost a nephew in Burma, had two sons taken prisoner of war also in the East and lost a sister-in-law, a nephew and a niece in an air-raid on the Ellen Street Schools in Hockley in 1941.

How did they cope?

My last memory of my gran is of me clambering onto her sickbed in the days before she died. I was nearly 5 (I have the memory of an elephant); I remember other great aunts surrounding the bed and my Auntie Mollie sobbing as I spoke to her, and everyone else seeming very solemn; I of course was oblivious to what was happening. My Gran, I seem to remember seemed very resolute and ok and didn't mind being hugged or climbed upon - of course she wouldn't... she was my Gran after all. 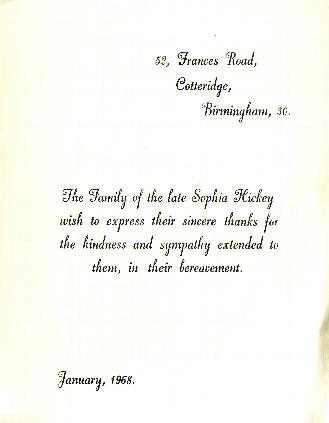 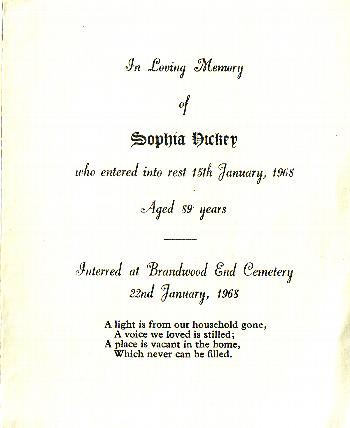 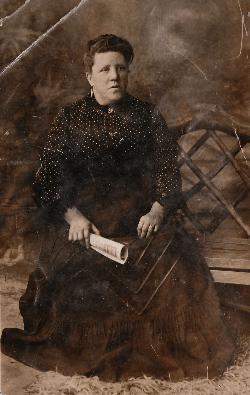 Above - The Funeral Card of my Gran, Sophie Hickey nee Sophia Lavinia Turland who died in her 90th year...  It wasn't until she died and my Nan went to register Gran's death that the family realised that for all of her 89 years, Sophia had been celebrating her birthday a week later than it actually was!

The grand looking lady on the left is Lavinia Mary Turland nee Harris (Sophia Turland's mother).  This   picture was probably taken during the late Victorian period. 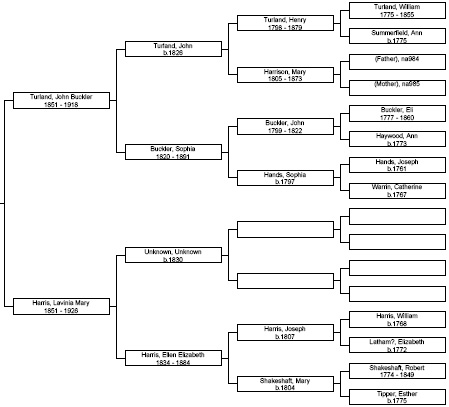 o 1841 Census – Henry Turland (Ag Lab), Mary & family were living at Long Lawford in the Parish of Newbold in Warwickshire

o 1871 Census – Henry Turland (Lab’r), Mary & family were living in the Civil parish of Newbold on Avon in the town of Long Lawford, Warks

Who, What, When & Where ~ Harris (Staffordshire)

o 1815 – 18 June 1815, the marriage between John Buckler and Sophia Hands took place at St Martin's in the Bull Ring, Birmingham.  Witnesses to the marriage were Sarah Garnett and Eli Buckler.  The Bride, Groom and both witnesses were all able to sign their own name.

o  The gravestone of William Buckler, his wife Mary and 2 of his brothers has been set into the paving outside St Pauls Church in the Jewellery Quarter, Birmingham.  All four were buried in a grave in the churchyard but many of the headstones were moved after the church and churchyard underwent extensive refurbishment due to its dilapidated state.  The gravestone reads...

It appears that  Mary and William were buried in a grave with two of William's brothers.  John is possibly one of the brothers; he was buried 4           October 1822 at St Pauls Church. 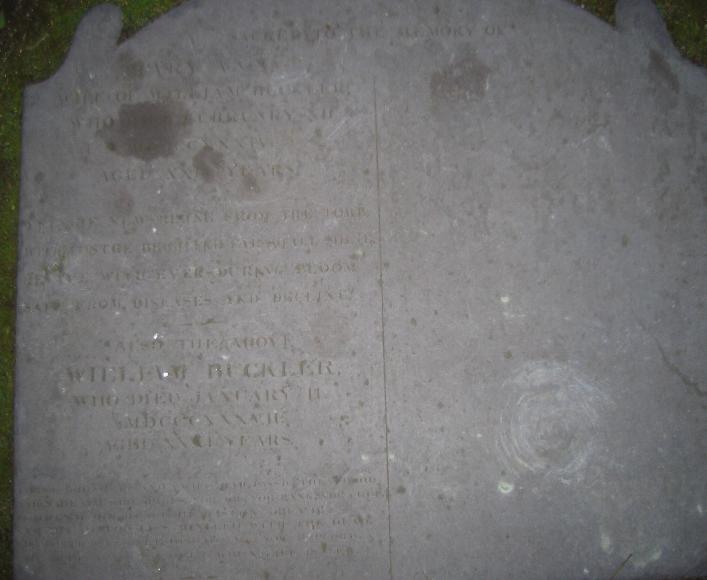