The Warrior Family from the West & North Ridings of Yorkshire 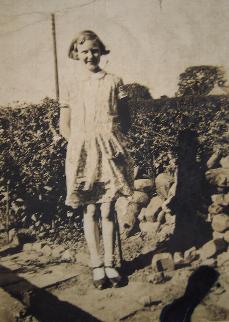 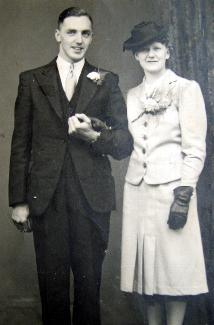 Left & Centre ~ a young Ellen Warrior...   Right ~ on her marriage to Thomas Alva Hymas 21 September 1940.  They married at St Mary's, Wath ~ a beautiful medieval parish church... strangely, and perhaps due to the war, no photo's were taken at the church.

My Nan was a very pragmatic woman with an extremely down to earth attitude.  She loved to play cards or board games and many a happy hour was spent playing Canasta or Spite & Malice which Nan usually won because she had that killer instinct that both my Mom and me lacked.  One of my Nan's favourite sayings when playing was "Oh well, sh*t or bust!".

Before and after marriage, my Nan worked.  In Yorkshire during the war she worked for the Ministry of Food, in the 50s, she worked as a School Dinner Lady in Bishop Monkton and after her move to Birmingham, I only ever remember her doing factory work for Crypto Peeless (later Kenwood) in the Factory Centre off Lifford Lane where she would cycle to on an old black bike.

Not many photo's exist of my nan in her youth, or indeed of her family; the few mementos I do have are reproduced on this site. I don't know why there is a lack of photographic evidence on this side of the family... perhaps my great grandmother Alice Hayton had the pragmatic traits that my nan inherited, or perhaps any formal portraiture just got lost; most likely the expense of photography, formal or otherwise was beyond their means. This, I'll probably never know.

What I do know is that my great grandmother did endure great hardships. I recall the stories that my nan used to tell of her mother going out to the fields at 4.00 a.m. to pick nettles to make a 'nettle tea' that was 'good for the blood', and of her baking vast quantities of bread loaves every morning.

My great grandmother Alice Warrior (nee Hayton) was widowed in 1929... her husband, my nan's father Thomas Warrior worked on 'the railway's'. He was apparently deaf and was hit by a train and killed on 2 January 1929 whilst working on the tracks. At the time they occupied a tied Railway Cottage in Melmerby which they were subsequently evicted from... they then moved into one of the new council houses in Melmerby. 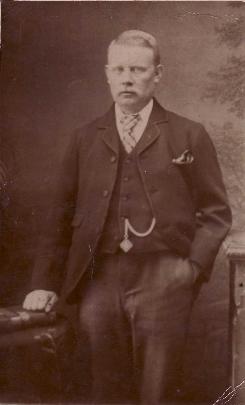 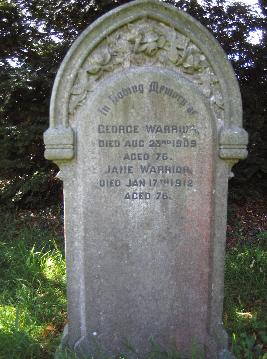 Above left to right ~ Thomas Warrior, Alice Warrior nee Hayton (cropped version) and the Grave of Thomas's parents ~ George Warrior and Jane Warrior (nee Pratt) who are buried in the Churchyard of St Mary in Wath.

It was believed that no photo's existed of my Great Grandfather Thomas; my Nan Ellen certainly never possessed one and my Mom had never seen a photo of her maternal Grandfather so she hadn't a clue what he looked like, then on a visit to my Nan's only remaining sibling in July, she announced that she had something for me!  Lo and behold, it was a photo of her father - the only surviving photo of him that we are aware of.  I can't describe the elation I felt, not only upon seeing it, but on her gift to me.  We were similarly surprised a year previously when my Aunt dug out the photo of her mother Alice.  My Mom remembers Alice but I had never seen a photo as my Nan did not possess one of her mother either.  This photo of Alice is a cropped version of the larger one of her with fellow potato pickers.

My nan had three brothers - George, Cyril and John (Jack). 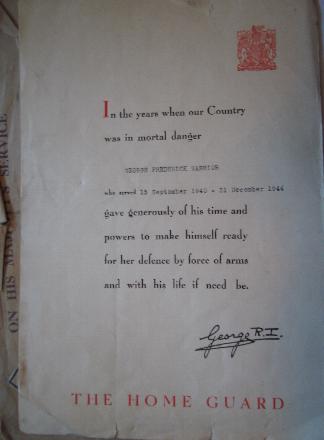 My mom remembers George as being a lovely, happy, friendly, man and a great uncle. He was in the Home Guard in WW2 and a photo of him can be viewed in the Warrior Photo's Album.

Cyril (Sid) was also highly thought of; his funeral was related in a local paper in 1977 -

"The death of Mr Cyril (Sid) Warrior at the age of 67 has removed a popular personality from the village of Dishforth where he had lived for nearly 40 years. Born at Melmerby near Ripon, his schooldays were spent at Wath and on leaving school, went into what was then known as farm service. His first job was on a farm at South Kilvington near Thirsk. He then moved to Southfield Farm, Dishforth where he was employed by the late Mr Fred Cawthorne. For a time, he lived at Sharrow where he started married life and worked on Ripon Camp. He also had a spell on RAF Dishforth during its construction years but then went back to farm work at Carthorpe. In 1942, he came back to Dishforth into the employment of the late Mr Richard Dearlove, at The Gables, and stayed there for the rest of his working life, later with Mr John Dearlove. The esteem in which he was held was shown by the large number attending the funeral in Christ Church, Dishforth. A collection for Cancer Research amounted to nearly £50. The funeral sevice was conducted by the vicar, the Rev. B.O. Allen and Mrs G Snow played the organ".

Family Mourners of Cyril were - Mrs E Warrior, widow: Mr & Mrs R Warrior, son and daughter-in-law (Ainderby Quernhow); Mr & Mrs F Jackson, daughter and son-in-law (Dishforth); Mr & Mrs J Warrior, brother and sister-in-law (Melmerby); Miss D Warrior, sister (Settle); Mrs L Warrior, sister-in-law (Whixley); Mr C Lord, brother-in-law, and Mr H Lord, nephew (Settle); Mr & Mrs J Ainsley, brother-in-law & sister-in-law (Kirby Malzeard), Mr R M Ayton(sic?), uncle (Nosterfield). The general mourners numbered some 96 plus friends and colleagues present.  My Nan never went to Cyril's funeral; I imagine one of the reasons was that my Grandad was taken very ill at the start of 1977 and so all of her spare time was spent going to and fro the Queen Elizabeth Hospital in Birmingham.  After my Grandad died in the May, my Nan was not herself for quite some time...  She was hard on the outside but very soft on the inside and the death of my Grandad  affected her greatlly.


Perhaps the old adage 'best not speak ill of the dead' could be advised here.... but...

My nan's other brother Jack, was er... someone we didn't speak of. Family lore has it that when my great gran Alice Warrior (Hayton) died, her will stated that the house (which was, when all's said and done - a council house), could be taken over by the first among her remaining single offspring to be wed. Everybody in the family assumed that this would be George who had been courting for a long time and was engaged, however soon after her death, her elder (and very much single) son Jack had gone off, joined a dating agency and reappeared with a bride, evicting his siblings from the house. My nan never forgave this, and never spoke to Jack again...  we know how to hold a grudge in our family!