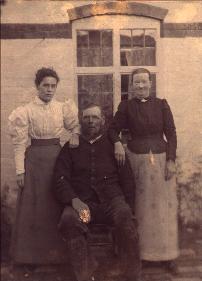 My great grandmother Sarah Jane Lovesey (nee Harris) is on the left of the photo. Pictured with her are her parents ~ father Thomas Harris and  mother Ann Harris (nee Shirley).

This photograph would have been taken around 1896 before Sarah Jane (or Jinny as she was known) married Charles Lovesey.  This location seems to be a popular spot for family photo's... it was taken outside their home in the Village of Hatton (famous for a series of 21 locks on the Grand Union Canal) in the County of Warwickshire.

Thomas Harris was born on the 12 March 1838 in Aston le Walls, the son of John Harris and Ann Harris nee Atkins; his birth was registered at Cropredy, Banbury.  His wife Ann Shirley was born on 2 December 1841 in Kenilworth.  They married on 20 October 1860 at the Parish Church of St Nicholas in Warwick...

Thomas died on the 4 September 1907 and was interred at Hatton Church. 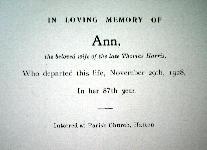 Ann Harris lived to the ripe old age of 87, dying on the 29 November 1928.  She spent the last few years of her life living in  Birmingham - the home of her daughters.  Wherever she died, she was interred next to Thomas in Hatton Churchyard. 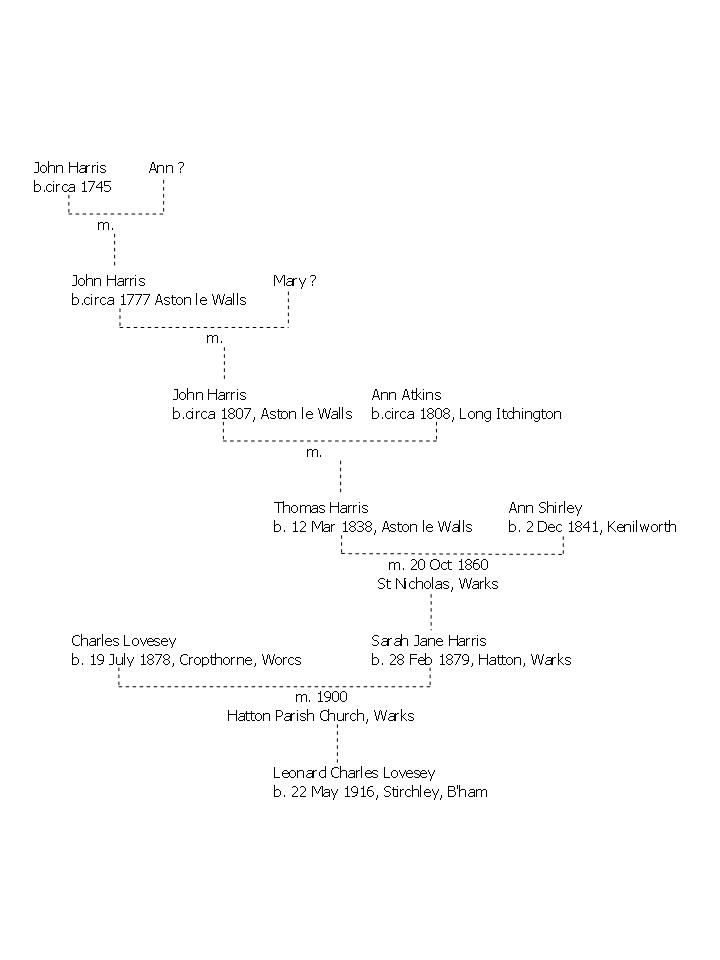 o 1838 – Thomas Harris was born on 12 March 1838 at 2 o’clock at Aston le Walls (unusual that the time is given as no twin can be found) to John Harris and Ann formerly Atkins.

o 1860 – Thomas Harris (Lab’r) married Ann Shirley at the Parish Church of St Nicolas in Warwick. Both were residing at Avon Street, Warwick

o 1891 Census – Ann Harris Snr is a widow, living with her daughter Elizabeth (an imbecile), grandson Henry Harris and his wife and children in Aston le Walls

The Shirley Family of Warwickshire & Oxfordshire

The 'Wanted Notice' that appears below dates from 1770 and possibly relates to the William Shirley named above.

o 1841 Census - Joseph and Eliza were living at Castle End, Kenilworth, he was an Ag Lab


o 1871 Census - Joseph Shirley is now a General Labourer living at No.2 Browns Buildings back of 46 Cromwell St, Nechells (his wife Eliza was in
Haseley with daughter Jane)


o 1881 Census - Joseph and Eliza are living at Washwood Heath Road, parish of Aston; he is a Labourer


o 1891 Census - Joseph is a widower living at 5 Lowan's Terrace, Clayton Road, Saltley with his son William and family


o 1901 Census - Joseph was a pauper living in the Warwick Union Workhouse at Warwick, St Nicholas